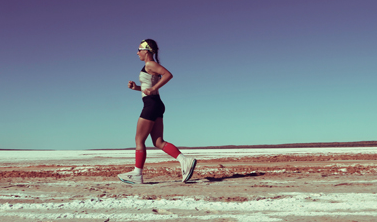 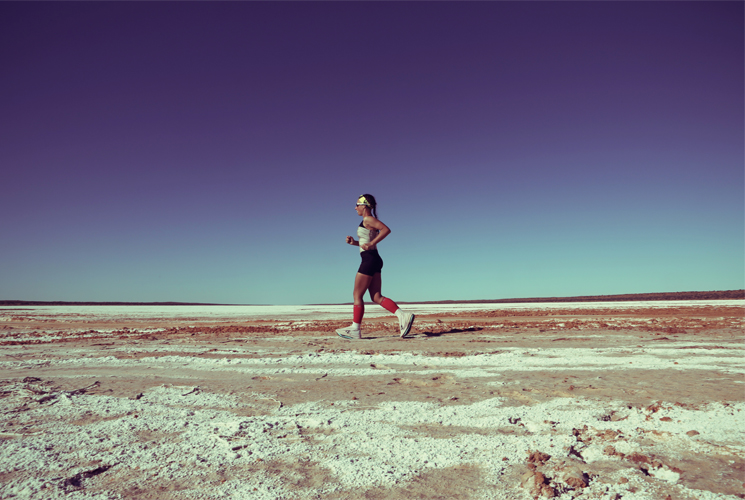 In 2010, 25 year old Australian, Samantha Gash became the first female and youngest person to complete RacingthePlanet’s Four Deserts Grand Slam in one calendar year. Her adventure, along with three others, Rick, Tremaine and Dave was captured in Jennifer Steinman’s documentary “Desert Runners”.

The Four Deserts Race Series commenced in 2002 and over the course of eight months each year racers travel to four different events; the Atacama Crossing in Chile, the Gobi March in China, the Sahara Race in Jordan and The Last Desert in Antarctica. At each event racers have five days to travel 250 kilometers (that’s six half marathons), with a rule that they are required to carry everything they need to survive in their own backpack.

The only support they receive is water and tent pit stops with highly qualified staff, all with experience in hiking, marathons and ultra marathons, and a medical team specializing in emergency and wilderness medicine.

I sat down with Sam to chat about her experience running four 250km ultra marathon’s in a year:

Let’s start at the beginning. Before the ultra-marathon’s, you ran your first marathon. A lady you met there told you about the Four Desert Grand slam, what made you enter?

I had just finished my first marathon and met Linda Quirk, a well-seasoned marathon runner who introduced me to the Four Desert Races. What attracted me to entering was the adventure element, sleeping in tents, spending time with strangers and the element of survival. The idea of travelling and adventure was the biggest draw card.

There was also the concept of possible failure, and see how you would go with something so unknown.

How did you train for before you started the four races?

In 2010, there was limited information on training and nutrition for ultra-marathons, let alone women running ultra-marathons. It was all trial and error, lots of error and injury, carrying random objects while running and sand running, also bikram yoga and training in a cold chamber at a University. I actually learnt more through doing the races than training for them.

Tell me more about your injury?

I was carrying too much weight while training and badly injured my ankle, six weeks out from the first race Atacama. Myotherapists, Chiropractors, Physios; the lot told me to just walk it and see how I’d go.

That first race I just walked and walked and learnt a lot by watching others from the back; and by the fourth day pushed hard and could actually run it. That’s what I’ve found through ultra-marathons; you can turn negatives into positives.

From that first race I developed a routine that I kept using; don’t go out too hard, keep a consistent and sustained effort in the first stages and give it all you’ve got and push yourself in the last couple. I just kept reminding myself, “Just keep moving, don’t stop for too long”. 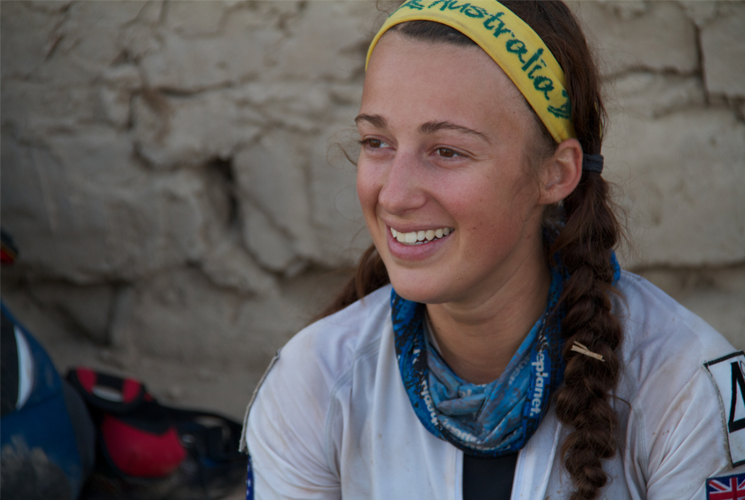 Tell us a little about each of the races, what was the best and the worst?

I loved Egypt (Sahara Desert), whereas China (Gobi Desert) was the hardest and most intense; the weather was incredibly challenging, stifling in fact. It was the long stage (and on day 5) and was the longest that I had ever run before and it turned out to be 10kms longer than we expected. It was also not knowing what had happened to Nick [Nicholas Kruse was one of the runners that died after that leg of the race due to complications he suffered while getting heat stroke].

But for me it wasn’t about what was the best or worst, but was about the relationships formed with people. Everything gets stripped down, and you are doing what you love to do in a supportive environment.

You talked about self-reliance after Nick’s death in Gobi – how did that change the way you approached the races?

As much as I need to be in the “zone” to be able to race, I always ensure that I don’t push myself to the point of no return. There is always the possibility that you need to be able to bring yourself out of the race context and get yourself to safety/navigate/etc. If you are at your threshold, it is harder to pull yourself together to do so. It means I watch my hydration, keep vigilant on my energy stores so I don’t get depleted and if need be I make sure I team up with another runner if I feel the environment isn’t safe.

How long did each race take you?

It wasn’t about how long, but how you were ranked. In the end, it didn’t really matter. Each race is different; Antarctica for example was just racing in circles until you were told to stop due to inclement weather. Planning wise was it was hard! It would be like in a CrossFit WOD being told to keep doing box jumps “Until I say stop”, how do you pace yourself for that?

You said you’re a planner, how did you cope with not being able to control everything while on the races?

It was hard and always an internal battle to get an optimal result without structured training (no day or week is the same), you just have to learn to let it go. You have to remember are always at the mercy of the environment, or when you get back from a race, mercy of the real world; jobs, family, social life. 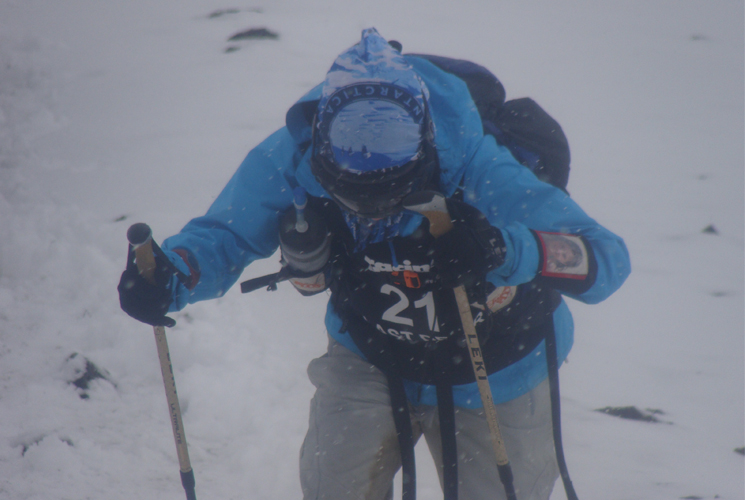 In the movie, the four runners featured, including yourself mentioned that you thrive on non-conformity, the unexpected, you push the boundaries. Do you think this is a pre-requisite for ultra-marathon runners?

Because they’re expensive to enter there is always a wide range of people entering – those who are ex road marathon runners, then you get people who think it’s a great way to travel, and then there are people like me that find it helps their personalities to get out there and try and get that ‘non-conformity’ in their lives and push the boundaries.

How does your training differ now to what it did before you started ultra-marathons?

It’s a lot more strategic that’s for sure! A resilient body equals a stronger and sturdy frame to base running off. There is more strength training, cross training, mobility work and flexibility, yoga still and isometric strength training too.

How did you juggle working and training, your social life?

Learn to live with sacrifice. Juggling a full time job, I’m committed to my family and relationship and now, the people I am drawn to are those in the same field. They understand what it takes.

What was in your pack and what was your nutrition like on each race?

We had to carry 2000 calories for each day as a minimum and consisted of high sodium foods like noodles, crushed up salt and vinegar chips, freeze dried foods, oats, hot chocolate and of course supplements too. I wore the same clothes each day, had specific compression gear, my sleeping bag, general survival and first aid gear too.

What kind of equipment did you carry and gear did you wear?

Many sports, especially endurance ones are as much about mental awareness and preparation. What were some of your thoughts and personal mantra’s along the way?

You have to believe you were out there for the long haul. One of the mantra’s I did have was “I chose to be out there’, as hard as it got I kept reminding myself that it was my decision to be out there. 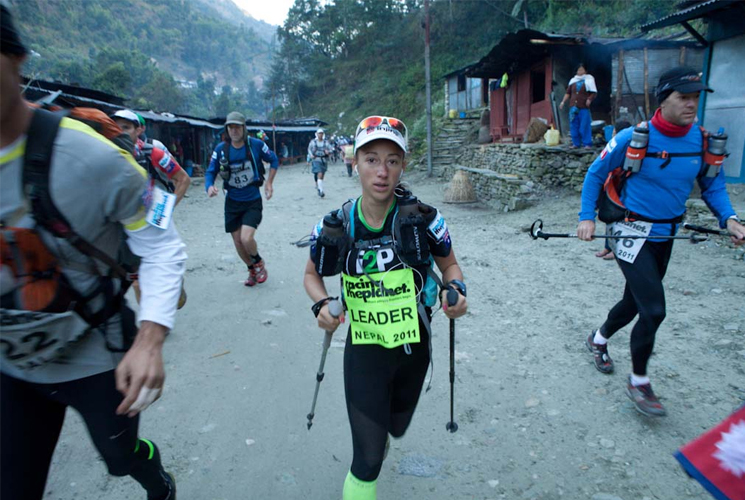 You’re the first woman, and the youngest to complete RacingthePlanet’s Four Deserts Grand slam, what does that mean to you?

It doesn’t matter to me that much at all. I am not phased or motivated by records, or want to claim the title. Although the title has allowed me to be, in some regards the position I am in now, and to get sponsorship.

How did doing the Four Deserts change you as a person?

It gave me perspective on what I care about and why I live my life the way I do. It’s allowed me to combine my love of adventure, travel and passion for social change.

I’m currently training for a major project with UK ultra runner Mimi Anderson to take place between September 25th and October 27th. Over the 32 days we’ll be averaging 80 kilometers a day (two marathons a day) while traveling the South African Freedom Trail.

The charity project is called Freedom Runners, and we’re raising awareness and money to support a special enterprise business that will train South African women to manufacture and distribute low-cost, reusable feminine hygiene products to women and girls in the Namahadi Community.

Do you have any training advice or tips for Crossfitters from an ultra-marathon point of view in regard to training?

RANDOM FACT: The film’s Director of Photography is Crossfit coach and fan Sevan Matossian. He has filmed a mini documentary with Greg Glassman, Directed and Filmed CrossFit documentary “Every second Counts and has previously filmed behind the scenes for CrossFit Games. Watch this interview with Sevan to find out how CrossFit helped him film Desert Runners.

Alison Wood, 27 is a novice CrossFitter who goes to Crossfit Darwin, marketing professional and crafter currently residing in Darwin, NT.  Follow her own blog North of Here for lifestyle and fitness posts or join her on Facebook. 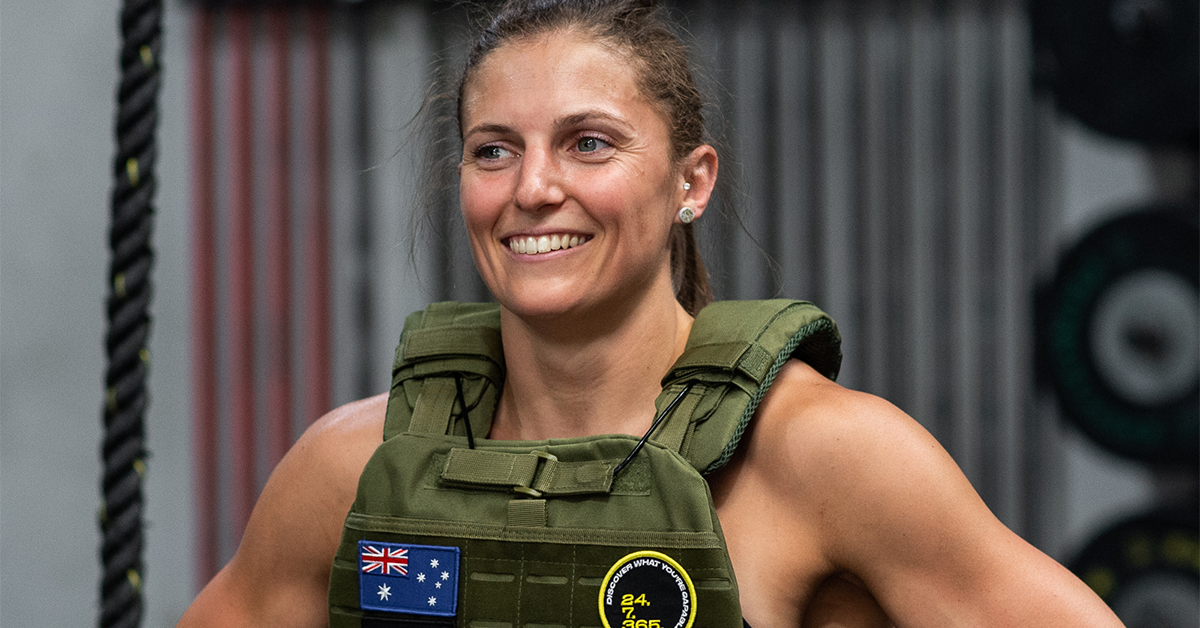 Running With a Weighted Vest: What are the Benefits? 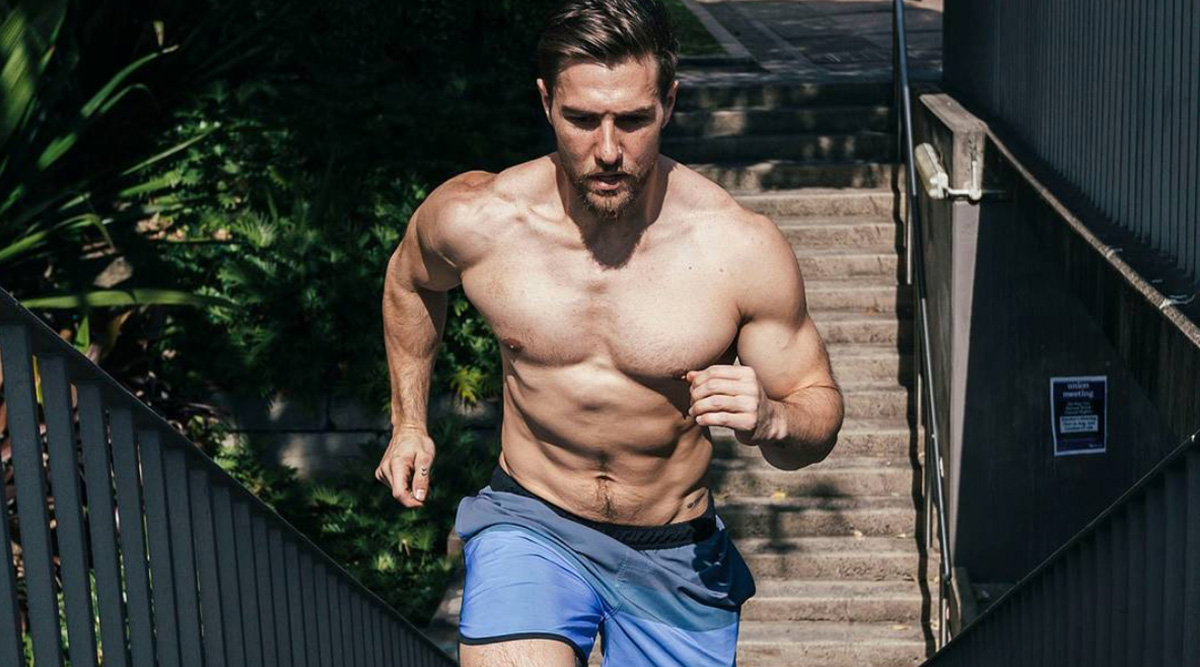 Khan Porter Reminds Us to Find Our Purpose in Training 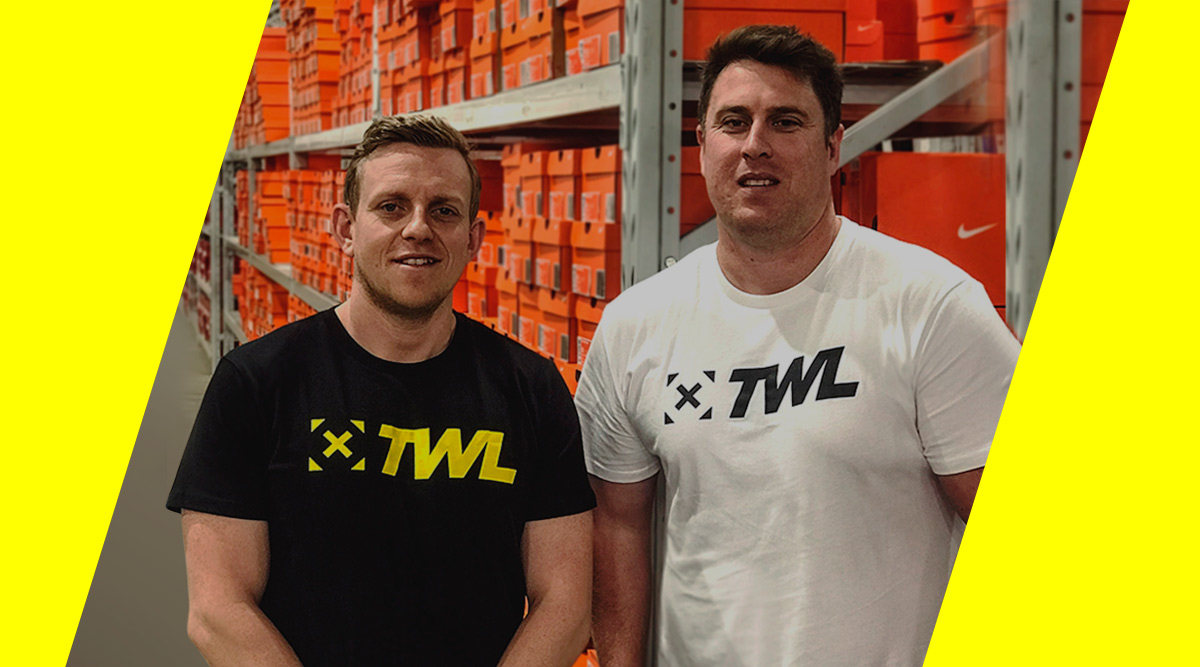 The Creators of The WOD Life Chat With Strive 168 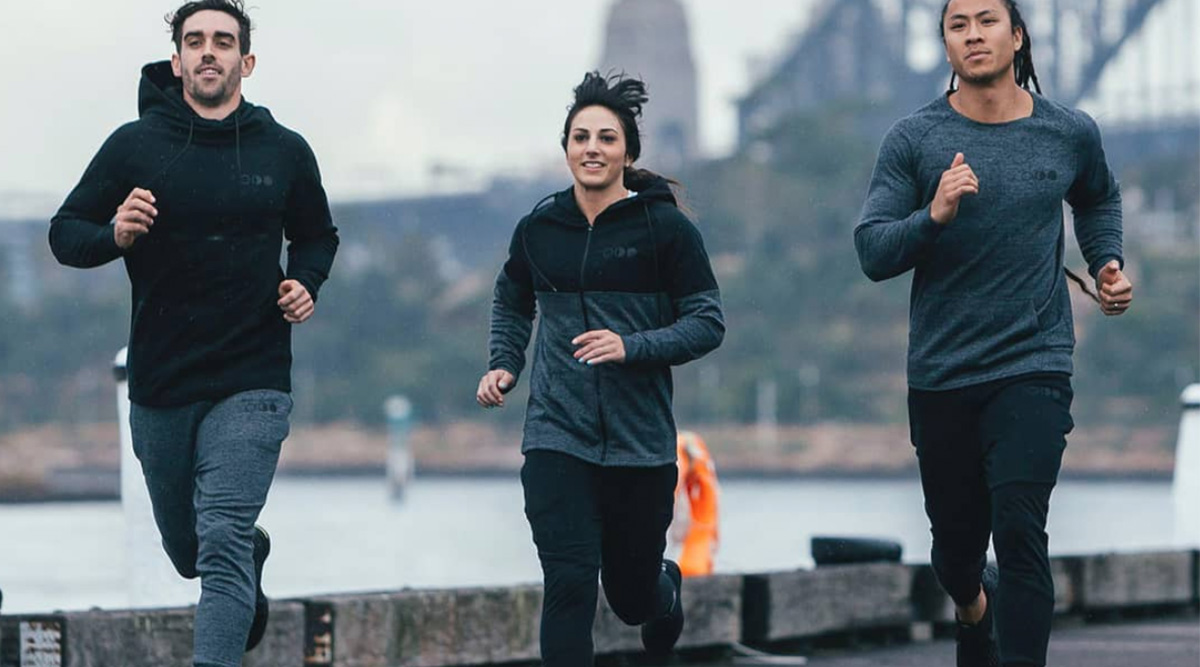